The Artists' Trail in Lamorna is a celebration of 20 years of the Lamorna Society, its members and their appreciation of the Lamorna Valley- its literature, its social and natural history and the many artists associated with it.

The Lamorna Society was formed in 1997 following the exhibition of Lamorna Birch's work at Falmouth Art Gallery. This was inspired by the biography of Birch, A Painter's Laureate: Lamorna Birch and his circle, by Austin Wormleighton, who became the Society's President.

Because so many Friends of the Valley attended the exhibition, a guided walk around Lamorna was organised by Keith Gardiner, a Lamorna resident and son of artist Stanley Gardiner. This walk was photographed by Angela Wheeler whose album has informed this guide. This booklet owes a great deal to that original walk but also to those who have added more recent knowledge, such as Hugh Bedford who has led many walks through the artists' valley, showing visitors the delights of Lamorna and the artists' haunts, and more recently Robert Fishburn.

It is available at various locations in and around Lamorna or can be purchased through the Contact Section of this website.

The Story of St Peter’s Players by Diane Tredinnick, published by the Newlyn Archive this September, is our latest book about Newlyn and its people. We are offering the book at a pre-publication discount of £1 which means that if you buy it before 17/9/2022 it will cost £7. The order form is attached.

Most Friends of the Archive will know that the St Peter’s Players was an amateur dramatic group located in Newlyn, Cornwall which performed at St Peter’s Church Hall for more than half a century. Many of you will have seen the performances and some of you or your family will have been involved acting or backstage. This book contains a great deal of material about the people who were members of the Players as well as the plays that were performed. It is an important contribution to local history and will be valued by those of us interested in Newlyn as well as those of us who know or are related to the many people that are named.

The Players performed 121 plays over the years 1962-2016. These ranged from farce to melodrama and from classics to traditional comedy. They were best known for their comedies, but there were other types of play that received excellent reviews in the papers. ‘Shadow in the Sun’ (November 1986) was an overtly political drama, ‘Cat’s Cradle’ (1989) was a thriller, ‘Deadly Nightcap’  performed in February 1993 as a celebration of the company’s 30th anniversary year was a straight drama.

Over the years, 215, women and children acted for the Players. Nine actors appeared in more than twenty productions. 147 different people were listed in the Production Team, either backstage or Front of House. The many jobs included stage management, creating and building the sets (many of them works of art), wardrobe, continuity, programme design, photography and promotion.

The Players generally made a profit and played to capacity audiences. Much of the audience would be made up of the Patrons of St Peter’s Players. This was a group of people formed in 1987 who paid a small annual fee. They received notification of events, got priority booking and had an annual Patrons’ evening with dinner. I am sure that many of you were Patrons of St Peters and were listed in the programmes!

Many of you have asked about my second book in the series about Newlyn. It has taken rather longer than I hoped to publish 'Newlyn When the Artists Came 1881-1913' is published as a hard back edition (Cost £25.00) and a soft back edition (Cost £15.00).The profits from the first book went to the Morrab Library and those from this book will go to Penlee House.

The book tells the story of Newlyn from 1881-1914. It is a tale of fishermen and fish dealers, boat owners and harbour personnel, who made Newlyn a great fishing port.During this time a new harbour was built that led to the historically separate communities of Newlyn Town and Street-an-Nowan becoming linked by a new Strand Road. It ia also a story of the philanthropic local gentry, like the Bolithos and the Le Grices, who contributed to the development of the town. But it is mainly the story of ordinary people and their churches, chapels and schools.

The story is told through the eyes of Caroline Gotch, an artist who witnessed the close links formed by the artists with the community they loved and served. During these years, artists cam to Newlyn to form what became known as the Newlyn Colony of Artists. They won national fame and many of them won international reputations. They were responsible for persuading the famous entrepreneur Passmore Edwards to finance the building of a Newlyn Art Gallery where they could show and sell their work. THe Forbes and Gotch families were to stay in Newlyn, building their houses Higher Faugan and Wheal Betsy above the village. Stanhope Forbes and his artist wife Elizabeth also opened a School of Painting that was to attract a new generation of artists to Newlyn.

Please buy the book. The order form is below. 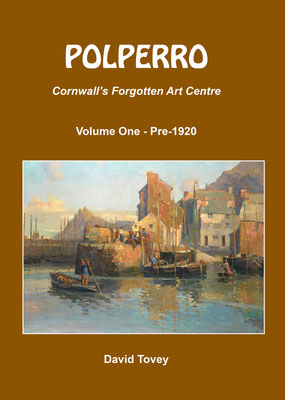 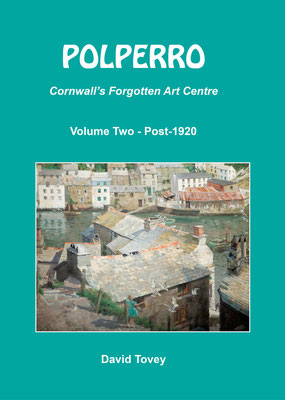 'Since the 1880s, Polperro has been the haunt of countless artists and yet nothing has been written on its development as an art centre and its particular characteristics.  There is not even a list of artists known to have worked there.  This seemed particularly strange given that paintings of Polperro by distinguished foreign artists kept on appearing at auction.  Accordingly, since 2018, I have been researching the subject in depth, and will be publishing two books - one dealing with the pre-1920 period and one with the post-1920 period - in April 2021.

These were due to coincide with an exhibition Polperro - Cornwall's Forgotten Art Centre that I was curating for  Falmouth Art Gallery but this has now been postponed to run from 2nd April to 18th June 2022.

The story that I have uncovered is totally fascinating, showing that Polperro has a rich artistic heritage that deserves to be better known and more widely appreciated.'

Details of the books are as follows:-

Newlyn holds a special place in our hearts. A fishing town brimming with character, art and heritage.

Writer, Lamorna Ash has penned a memoir about her time with the fishing community there.

There is the Cornwall Lamorna Ash knew as a child - idyllic, folklore-rich place where she spent her Summer holidays. Then there is the Cornwall she discovers when, feeling increasingly dislocated in London, she moves to Newlyn, a fishing town near Lands End. This Cornwall is messier and harder - yet it offers more life than she could have imagined.

Newlyn doen't seem like a place that would welcome strangers, but before long Lamorna finds herself on a week-long trawler trip with a crew of local fishermen, afforded a rare glimpse into their world, their warmth and their humour. Out on the water, miles from the coast, she learns how fishing requires you to confront who you are and what it is that tethers you to the land. But she also realises that this proud and compassionate community, sustained and defined by the sea for centuries, is under threat, living in the lengthening shadow cast by globalisation.

An evocative journey of personal discovery, replete with the poetry and deep history of our fishing communities. Dark, Salt, Clear confirms Lamorna Ash as a strikingly original new voice

A BBC Radio 4 Book of the Week

Published by the Newlyn Archive 2020

The Square in Newlyn.

Lamorna Society Member Heather Whatley has recently published a book Laura Knight in the Malverns' about the 30 years Laura and Harold Knight lived and worked in the Malverns. Heather isFounder and Vice Chairman of Friends of Dame Laura Knight Society. The book is priced £7.50 and is available on Amazon.

In 2017 the Munnings Art museum opened a special exhibition entitled Munnings and the River. This was designed to reveal another side to the artist who is well-known for the equine portraits that made him famous and wealthy. During the exhibition the museum engaged Tim Gardiner as Poet-in-Residence to create poetry and procse inspired by the paintings on display.

During the residency, forty four poems, inspired by landscape paintings by Sir Alfred Munnings, were published in twenty three national and international poetry magazines and were included in two anthologies.

As part of the museum's programme of public events there were poetry evenings for local writers, workshops focussing on Jaspanese haiku and tanka poetry, Pop-up Poets moving amongst the museum's day visitors reading a selection of their works and an open mic reading run during the high summer in a marquee on the museum lawn.

The Munnings Art Museum is delighted to present this book of creative written responses to the paintings of Sir Alfred Munnings. It is a perfect companion to the exhibition Munnings and the River: in his own words.

A century after many of them were first written this beautiful publication, based on fifty-four letters painstakingly transcribed

by the museum, reveals never-before-seen correspondence from Sir Alfred Munnings to his wife.

When the first of the letters was written in April 1920, Munnings had established himself as an artist of repute following

the critical and public success of his First World War paintings. The deluge of commissions that followed meant that he was often away from his idyllic new home in the village of Dedham, travelling great distances to paint his patrons. Billeted in local

hostelries, or in the homes of his clients, he began to write regular letters home to his new wife, Violet.

Seemingly scribbled in quieter moments, these affectionate and conversational letters, with little regard for grammar and

punctuation, dash from subject to subject. They also reveal the abiding love that Munnings had for Violet; often signed off

An exhibition to accompany the book will open at the Munnings Art Museum in due course.

The port of Newlyn has a rich seam of fascinating stories to tell and none more so than how Ordnance Datum became the bench mark against which all vertical heights, hills and mountains in Mainland Britain are measured.

What this comprehensive account shows is not just how much progress has been charted - from the primitive methods of measurement involving a man and a bucket to the sophisticated technology of Global Navigation Satellite systems that now measure data automatically every second - but also the many human stories that it encapsulates.

From Liverpool's Jeremiah Horrocks in the 1600's to local families in the 20th century, all those involved in documenting the rise and fall of the tide have contributed to the strategic national significance of the Port and provided Newlyn Pier and Harbour Commissioners with a robust platform for conservation and development.

Given our unique geographic location and exposure to the Atlantic's tidal surges, Newlyn has experienced its fair share of challenges to overcome and the 21st century is no exception: climate change and Brexit are our current watchwords.

What characterises Newlyn and the people who live and work in it, is resilience in the face of change. In spite of the inexorable march of automation, the Tidal Observatory has been a constant for the last 130 years and Newlyn has maintained its position as the sole baseline for the assessment of mean sea level.

Whilst technological advances will change the way in which data id captured and trsnsmitted, and other challenges will affect our coastal community, the Port of Newlyn

will continue to take pride in the stories of the past as well as create new ones for the future.

David Tovey has recently completed this biography of Crosbie Garstin (1887-1930) who was  author, artist, adventurer and so much more...

A selection of books written about Lamorna and the artists and writers past and present connected to Lamorna, Newlyn and St Ives.