The Society is named after the Lamorna Valley in West Cornwall, an area associated with numerous artists in the 19th, 20th and 21st centuries.

'What was it that planted the first cottages in such a spot as this, so wild and lonely and difficult of access? There was surely suitability for something in this cove which made it seem a desirable abode. I conclude it was its very loneliness that fitted it for occupation which thrive best when seen by fewest eyes.'

The valley and nearby cove have great natural beauty, and to this day retain the unspoilt nature that first attracted artists to the area. Lamorna has many interesting geological features, which appear in numerous artists' pictures.

'It would seem that we had suddenly entered paradise; a densely-wooded valley filled with lichen-covered trees of greenish grey, whose branches threw bluish tracery of shadow over rich tufts of grass already speckled with the yellow of early primroses and white anemones.'

(Laura Knight recalling her first visit to Lamorna in the Spring, 1907) 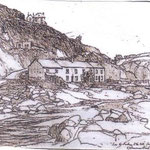 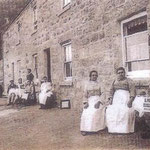 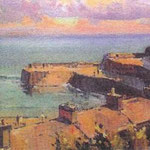 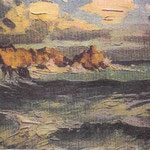 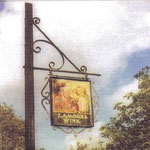 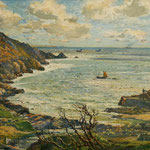 1. A drawing of the Cove, by Lamorna Birch

'I've taken a little house here made of granite, bracken and honeysuckle; so delicious to lie in the sun and hear nothing except an occasional insect or bird.'

2. An old photo of Mrs Penrose's refreshment rooms at Lamorna.

Dylan Thomas, pausing in Lamorna before his marriage, 1937.

'A beautiful little place full of good fishermen and indifferent visitors... and the haunt unfortunately of aged RAs.'

3&4. Two paintings of the Cove by Edwin V Forrest.


If we should meet again, it will be on the coast-path to Lamorna

There, where the headland pushes darkly unremitting

The cove will be quiet-

Small brightly-coloured boats pulled up upon the slip

No cars, no people,

No sounds but for the sea, the warm breeze,

The call of a bird.

The sun will be making a shining, silver

Sparkling path across the waves.

You will be there, young, happy, smiling-

And I will run along that silver path

To where you stand with outstretched hands.